Vitamin K2 kills two birds with one stone: it can prevent “hardening of the arteries” (arteriosclerosis) and the resulting and dreaded cardiovascular diseases and at the same time counteract brittle bones (osteoporosis).

The history of the vitamin starts with calcium. This important mineral is greatly appreciated as a vital component of stable bones and teeth. Yet, Calcium, is also undesirable in the form of deposits in the blood vessels, which can lead to heart attacks and other cardiovascular diseases. So how can we ensure that calcium does not remain in the arteries but is used for bone augmentation? This is precisely the main task of vitamin K2, which is responsible for ensuring that calcium does not remain in the blood but is deposited in the bones. Vitamin K2 thus kills two birds with one stone: It prevents arteriosclerosis and fragile bones (osteoporosis) at the same time. What a gift!

Vitamin K is also involved in blood clotting (= coagulation). It owes its name to this fact. Together with vitamins A, D and E, vitamin K is one of the fat-soluble vitamins. For good absorption it should be consumed with fatty foods.

Vitamin K2 in the video

Learn more about Vitamin K2 and the vital substances it contains in the video with Dr. Heinz Lüscher.

Vitamin K is found in nature in two forms: as vitamin K1 and vitamin K2, both of which are also called Phyllochinone or Menachinone. Vitamin K1 is mainly found in the leaves of green plants because it is needed for photosynthesis. Vitamin K2, on the other hand, is produced by micro-organisms and is therefore found primarily in fermented foods such as sauerkraut, certain types of cheese or fermented soya (“natto”). The bacteria in the human intestine also produce a certain amount of vitamin K2.

The Differences between K1 and K2

The two K-vitamins have a similar chemical structure. They consist of an identical ring and differ only in their side chain. The main difference between K1 and K2 lies in their different bio-availability and how the body metabolises them. Only about 10 % of Vitamin K1 is absorbed in the intestine. It moves into the liver and there it is broken down relatively quickly. Vitamin K2, on the other hand, is almost completely absorbed. In addition, it does not remain in the liver but is redistributed from there to the bloodstream and peripheral tissues.

This difference in the metabolism of the two K vitamins is probably the reason why some effects have only been observed for vitamin K2, but not for vitamin K1. In a major study (“Rotterdam study”, see below) those who took the most K2, had the lowest risk of suffering or dying from cardiovascular disease. This correlation was only found for K2 and not for K1.

Vitamin K2, is mainly found in two different forms, which differ either in the length of their side chain or in their spatial arrangement (see box “Vitamin K2 is not equal to K2”). Important: The best vitamin K2 is the one with the form MK7 all-trans.

The Effects of K1 and K2

The main effect of vitamin K is the activation of specific proteins. Without vitamin K, these proteins remain ineffective (or dormant) and cannot perform their function in the body. These proteins include proteins:

When the level of vitamin K2 increases, so is the level of these specific proteins that are activated. This is exactly the mechanism by which K2 prevents osteoporosis and arteriosclerosis as mentioned above.

Vitamin K2 is required to activate the bone forming protein osteocalcin. An increased level of inactivated osteocalcin leads to a lower bone density and thus to an increased risk of fractures. In the case of vitamin K2 deficiency, too little calcium is stored in the bones and osteoporosis can develop.

Studies have shown that vitamin K2 can significantly reduce bone loss in osteoporosis patients (from a dose of 180 µg vitamin K2 per day). If vitamin D3 is administered at the same time, the two vitamins act synergistically and thus bone density increases. However, osteoporosis should not be treated by high doses of vitamin D3 alone (please see section the on osteoporosis).

Vitamin K2 activates the glaucoma proteins and thus ensures healthy blood vessels. The Rotterdam study has shown that people who consumed a lot of natural vitamin K2 over 10 years had significantly fewer calcium deposits in the arteries and a much better overall cardiovascular health than those who did not. According to this study, vitamin K2 can reduce the risk of developing arteriosclerosis or dying from cardiovascular disease by 50%. Important: This correlation was only found for vitamin K2, but not for vitamin K1, and it has even been shown that K2 not only protects against calcification, but can also improve atherosclerosis, which may already be developing.

Whilst it is true, that the effect of certain anticoagulants is reduced by a comparatively small amount of vitamin K (1 mg), it would however, be wrong to now avoid vitamin K altogether. Medications from the coumarin group are those that are affected. At a low vitamin K level, a small fluctuation – for example, because you have eaten a vitamin K rich foodstuff – has a big effect on blood clotting. However, if you always consume a small amount of vitamin K, the medication (anticoagulant) can be adjusted to this higher vitamin K level and an equal fluctuation has a much smaller influence on blood clotting. It goes without saying that in this way one does not lose the other positive effects of vitamin K!

Osteoporosis is a common age-related disease of the bone that makes it more susceptible to fractures. It can be excellently treated (or even avoided) by taking vitamin D (3000-4000 IU per day) and vitamin K2 (200 micrograms). These two vitamins complement each other and synergistically promote the remineralization of bones. A sufficient supply of magnesium (400-800 mg) must also be ensured.

In the absence of vitamin D, bone building cells (osteoblasts) decrease and bone volume decreases. This can be corrected by taking vitamin D and thus more osteoblasts are then produced again by the body. However, vitamin D also promotes the maturation of bone-degrading cells (osteoclasts) and thus indirectly promotes bone loss. This effect of vitamin D is suppressed by taking vitamin K2 at the same time. Furthermore, as described above, vitamin K2 is essential for the body’s own production of osteocalcin, a protein involved in bone mineralisation.

If osteoporosis is present, one’s hormones should also be examined. On the other hand, supplementation with calcium is unnecessary because we consume more than enough calcium with our food. There is also no need to eat extra dairy products.

I recommend taking about 200 micrograms of vitamin K2 per day. Vitamin K2 is non-toxic even in high doses and cannot lead to hypervitaminosis. In addition, vitamin K is free of side effects (apart from its influence on anticoagulant drugs).

Not all Vitamin K2 are equal!

Vitamin K2 exists in different variants, which differ either in the length of their side chain (MK4, MK7 and MK9) or in their spatial arrangement (cis- or trans-variant). MK7 (also known as menachinone-7) is considered the most effective form of vitamin K2, because it exhibits the highest bio-availability, is more fat-soluble, circulates in the bloodstream for the longest time and is therefore the variant of choice.

Yet, MK7 is also found in two forms called cis- and trans-isomers. The two forms have the same chemical sum formula (i.e. both have the same number and sequence of atoms), but differ in their spatial structure. However, the body can only make sense of the trans-isomers. Vitamin K2 in the cis-form is almost completely ineffective. It is therefore important to ensure the highest possible proportion of trans-isomers. Products with a trans-isomer content of more than 98% are called “all-trans”.

The manufacturing process plays a vital role here. If K2 is produced synthetically, too many cis isomers are produced. Solvents must also be used, some of which remain in the product. I find that vitamin K2, which is obtained from bacteria in a natural fermentation process, is much better.

Finally, caution should be exercised when combining Vitamin K2 with products containing calcium. In such circumstances, the stability of vitamin K2 is not guaranteed. Also, we often find ‘label fraud’ where a product is advertised with vitamin K2, but contains only a small amount of K2 and a lot more of K1.

To summarise: The best vitamin K is vitamin K2 in the form of MK7 all-trans, which is obtained by fermentation by bacteria and does not contain any other minerals..

Studies on Vitamin K and its protection against arteriosclerosis 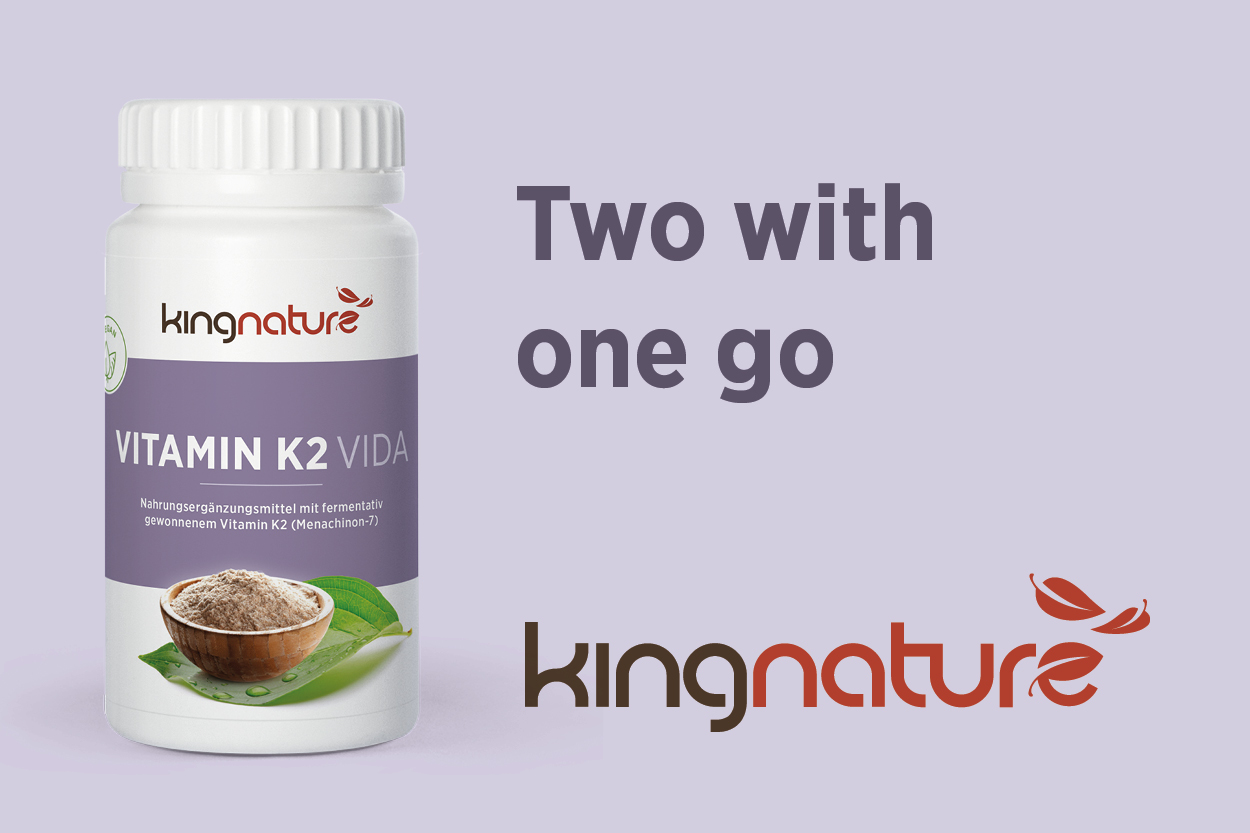