Vitamin D is vital. It plays a significant role in the human body’s calcium and phosphate metabolism. It is, amongst other health benefits, important for the immune system and the cell growth. Vitamin D receptors are located in more than 30 target tissues. Vitamin D is a combination of fat-soluble secosteroids, which are essential for maintaining the homeostasis of minerals. The early stage of Vitamin D is called cholecalciferol or Vitamin D3. Cholecalciferol is biologically inactive and will be converted by the body to active Vitamin D, which is also known as calcidiol.

In the body this Vitamin works like a hormone. It is vital for healthy teeth, bones and muscular system. Furthermore, it regulates the concentration of calcium and phosphate in the bloodstream, controls the storage of calcium in the bones and protects bones from demineralisation after climacteric, thus preventing so called osteoporosis. Vitamin D is important for cell growth and it inhibits certain cancer cells from cell differentiation. In addition, it also effects the immune system. In old age, a deficiency leads to falls and bone fractures. In children, vitamin D develops a strong and well-shaped skeleton as well as healthy teeth. Recently, there has been increased evidence that vitamin D has a favourable effect on the treatment of chronic and severe illnesses.

Vitamin D3 in the video

Learn more about vitamin D3 (Vitamin D3 Vida) and the vital substances it contains in the video with Dr. Heinz Lüscher.

Our bodies can produce the vitamin. When we are in the sun, vitamin D3 is formed in our skin, which is subsequently converted to vitamin D.  On a sunny day, we receive far more than the daily recommended requirement – at least in theory.  The light intensity and therefore the formation of vitamin D3 on the skin is dependent on a number of factors such as the angle of the sun, it’s height over the sea, the weather, etc. Window glass absorbs almost all the necessary UV-B components in sunlight.  Sun screen lotion inhibits the vitamin D3 production from a light protection factor of 97%.  Anything that comes between the sun’s rays and our skins reduces and prevents the formation of vitamin D in our skin.  Because of our modern lifestyles, many people spend too little time in the sun or use too much sun screen to allow sufficient formation of vitamin D.

The situation is obviously worsened in winter. For the sunlight to contain sufficient UV-B rays for vitamin D synthesis, the sun’s rays must reach the earth at an angle of more than 35°. In Switzerland this only occurs between March and mid-October. In the winter months, any vitamin D reserves in the body and food are the only natural sources.  About 20% of the daily requirement can be found in the foods we eat. Vitamin D is found in some of the fat-rich foods e.g. oily fish, offal, eggs and to a limited extent also in dairy products.

In recent years, it has been increasingly recognised which civilisation illnesses are associated with the widespread lack of sunlight in modern societies. It can be assumed that at least 70% of the Swiss population have a deficiency. The following risk groups are particularly vulnerable:

Vitamin D is expressed in international units (IU) or micrograms (µg) (40 IU = 1 µg). Current recommendations for daily requirements are considered by many experts to be either irrelevant (for sufficiently UVB light-exposed individuals) or insufficient (for the majority of the population in civilized societies of higher latitudes). After all, the official recommendations (daily maximums) have been raised in recent years and are now 2800 IU or 70 micrograms per day for adults (Switzerland). However, my experience is that a dosage close to the maximum daily dose of 4000 IU is more target-oriented in many cases. In winter, 5000 IU per day can be taken without hesitation, while in summer it can be reduced to 3000 IU. An overdose is not to be feared with doses up to 10,000 IU per day. In order to maintain the vitamin D level in the blood, 2000 IU daily are necessary (Study Holick M.F et al., J.Clin. Endocrin. Metabol., Published ahead of Print, June 6, 2011).

Osteoporosis is a disease where decreased bone strength increases the risk of a broken bone. It is the most common reason for a broken bone among the elderly. This condition can be treated (or avoided) by consuming Vitamin D (3000-4000 I.U) and Vitamin K2. These two vitamins complement each other and synergistically promote bone remineralization. Furthermore, a sufficient supply of magnesium must be ensured.

If there is a vitamin D deficiency, the bone-building cells (osteoblasts) decrease and the bone volume decreases. This can be corrected with the intake of vitamin D. However, vitamin D also promotes the maturation of the bone-degrading cells (osteoclasts) via a further control loop and thus also indirectly promotes bone degradation. This effect is suppressed by the simultaneous intake of vitamin K2. At the same time, vitamin K2 is essential for the body’s own production of osteocalcin, a protein involved in bone mineralization. Vitamin K2 is best taken in the longer lasting and more effective form MK7. When taking magnesium, you should pay attention to the salt to which it is chemically bound. Magnesium citrate has an unfavourable effect on the supply of iron.

If necessary, the hormones must also be examined. However, supplementation with calcium is unnecessary, since we take more than enough calcium with our food. Also, there is no need to eat extra dairy products.

Vitamin D and vitamin K2, as already mentioned, act synergistically, i.e. they belong together and complement each other. For this reason, I recommend taking 200µg of vitamin K2 at the same time as a daily intake of 4000 IU of vitamin D or more. Vitamin K2 conducts excess calcium from the blood into the bones. This ensures that the calcium is not deposited on the walls of blood vessels (arteriosclerosis) or in the form of kidney stones, but is supplied to the bones. In this way, vitamin K2 can simultaneously prevent the dreaded arteriosclerosis, but also prevent or treat osteoporosis. Vitamin D thus promotes the resorption of calcium, which explains why the interaction of vitamin K2 is all the more important when taking higher amounts of vitamin D.

As we age our skins ability to produce Vitamin D decreases, combined with the fact that many elderly people avoid direct exposure to the sun. The result is many elderly people have a deficiency (generally 50% of the elderly and 80% of hip fracture patients) Vitamin D not only strengthen bones, it also improves co-ordination, balance and muscle tone. As sufficient amounts of Vitamin D are consumed both the damage to bones from falls is reduced (bones are stronger) and reduced frequency of falls (improved balance and co-ordination) is observed. (Basler Sturzstudie, Bischoff HA et al, J Bone Miner Res 2003; 18; 343-351). Vitamin D thus becomes an important Community Health issue as the resultant prevention of bone fractures and accidental falls of the elderly is significantly reduced.

Infants and toddlers are growing rapidly and are increasingly protected from the sun’s radiation. However, it is precisely these sunrays that would be necessary for the formation of vitamin D. According to the literature, the intake with breast milk is not sufficient for the supply of the infants. Food also makes only a small contribution. Therefore the vitamin should be supplemented.

Supplementation in the form of drops is recommended for infants from 3 months and children up to 3 years of age, 400 IU in the 1st year of life, 600 IU in the 2nd and 3rd year of life.

The drops can be administered directly into the mouth, on the soother or with a spoon. It can also be added to breast milk, milk or pap food. However, care must be taken to ensure that it is completely consumed.

Pregnant women and nursing mothers should also make sure that they have a sufficiently high supplementation at all times of the year.

It is obtained industrially from wool fat. Wool grease (lanolin) is produced when washing sheep’s wool. This is cleaned in several steps (at least 200°C, 20 minutes, by transesterification or hydrolysis). Cholesterol is then extracted from it, which is converted into cholecalciferol (vitamin D3) by means of UV radiation and pressure. The vitamin D3 is then purified. Although this is very unlikely, the end product may contain traces of wool fat and is therefore vegetarian but not vegan. 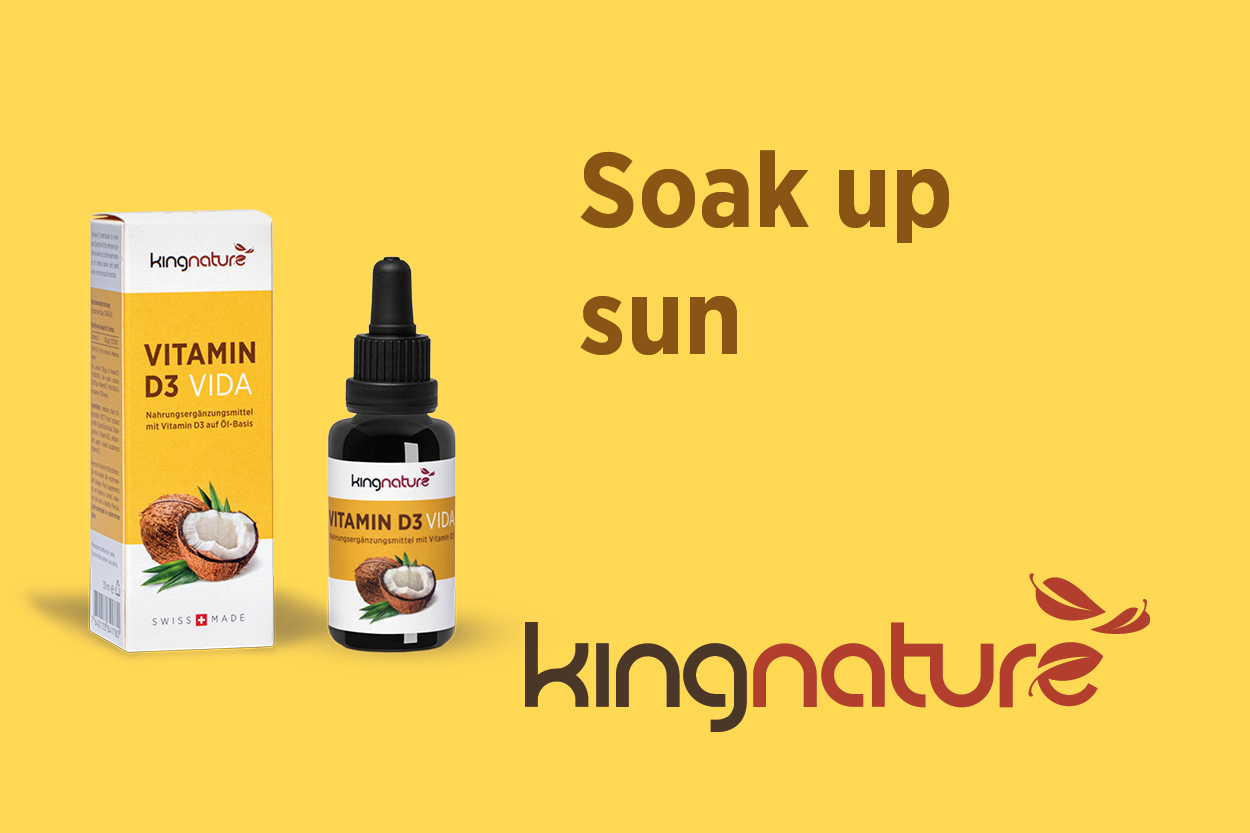 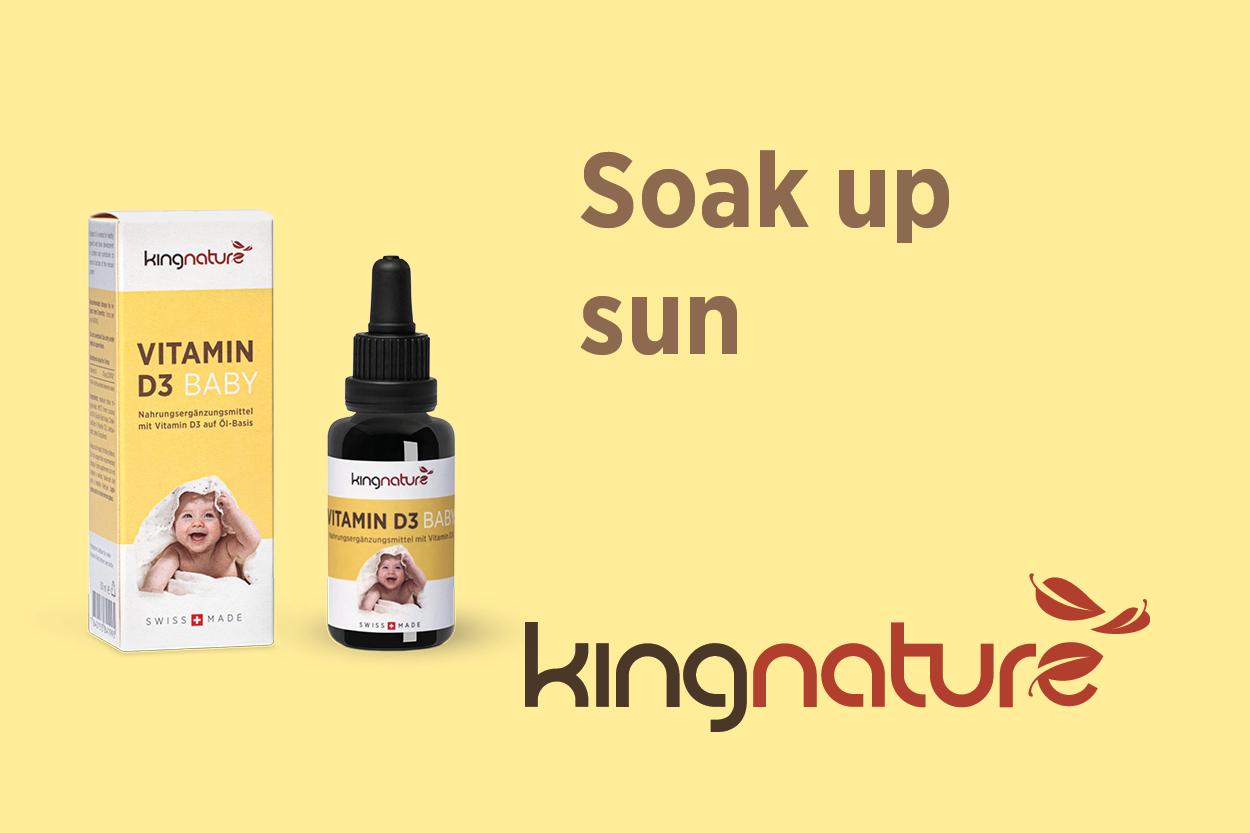