The wonder tuber turmeric has been known as a remedy in traditional Chinese medicine and Ayurveda for thousands of years, but has also been very well researched in our latitudes in recent years. The medicinal effects of turmeric (active ingredient curcumin) are very diverse, which is why it can be used very widely.

Where does turmeric come from?

The plant turmeric (lat. name Curcuma longa) originates from tropical and subtropical regions in South Asia. German names are Gelber Ingwer, Safranwurz or Gelbwurz. Although turmeric belongs to the ginger family, it is not identical to the common ginger, even though they look similar at least externally. As with ginger, the rhizome (rootstock) of the plant is used. Turmeric is available fresh as well as dried and powdered.

Turmeric (Curcuma longa) in the video

Learn more about turmeric and the vital substances it contains in the video with Dr. Heinz Lüscher.

Turmeric in the kitchen

Turmeric has been called the “golden spice of life” in India for thousands of years and Indian cuisine would be unthinkable without it. Turmeric is the main ingredient of curry and does not taste very hot. Even in our latitudes the yellow root can be found in many shops and can be used in various dishes. But beware: turmeric alone is almost not absorbed in the intestine! When mixed with a little black pepper (active ingredient piperine), the absorption in the intestine is increased several times. A good turmeric powder has therefore always had some pepper added.

In traditional Chinese medicine and Ayurveda, turmeric has been known as a remedy for thousands of years. Meanwhile, numerous studies confirm the versatile properties and effects. The substance that is effective for health is called curcumin. The other components of the root tuber are not important from a medical point of view, even though turmeric contains some vitamins and minerals.

The effects of turmeric are very diverse

For these reasons curcumin can have a good effect on many different diseases!

Turmeric binds iron in the intestine. It must therefore be taken with caution in cases of iron deficiency or anaemia and is best combined with a well-tolerated, herbal iron product such as Eisen Vida. If possible, do not take it at the same time of day (keep a time gap between turmeric and iron product).

The two most common chronic inflammatory bowel diseases are ulcerative colitis and Crohn’s disease. While ulcerative colitis affects only the large intestine, Crohn’s disease can affect the entire digestive system from the oral cavity to the rectum. The cause of these diseases is not known, it is a kind of misdirected immune reaction. However, I personally am convinced that in many cases there is a food intolerance behind it, which could be well treated. In orthodox medicine there is only one invasive therapy with many side effects and moderate success. Both diseases are treated with high doses of cortisone, later on with immunosuppressive drugs and finally only one operation remains.

Patients suffering from Crohn’s disease in particular suffer from a serious lack of almost all important vital substances because the inflamed intestine can no longer absorb these substances. An anti-inflammatory effect of the intestinal cells with turmeric, together with other anti-inflammatory vital substances and a detoxification by the volcanic rock clinoptilolite (a so-called intestinal sanitation), have an excellent effect on all inflammatory diseases of the intestine. In addition to its anti-inflammatory and antioxidant effects, turmeric also has a positive influence on the intestinal flora, which in itself is a comprehensive effect on overall health. Because today we know that a well functioning intestinal flora is the prerequisite for health and healing. Thus turmeric can also be used for digestive disorders, flatulence, etc.

It is a fact that far fewer Indians suffer from Alzheimer’s than Western Europeans or Americans. This dreaded disease is increasing alarmingly. Today, 10 % of 65-year-olds and around 30 % of those over 80 are affected. The costs for Alzheimer patients are higher than for heart or cancer patients and are gradually getting out of hand. Any remedy that helps is therefore highly welcome.

Because of the numerous positive effects of turmeric and the fact that the active ingredient curcumin can easily cross the blood-brain barrier and therefore also shows its antioxidant and anti-inflammatory effects in the brain, it was decided to study the effects on Alzheimer’s disease.

It has been shown that curcumin is able to mobilise and break down so-called plaques (beta-amyloid deposits) in the brain that are related to Alzheimer’s disease. There seems to be an improvement even in Alzheimer’s patients with turmeric in need of care. It has not yet been conclusively proven that turmeric can prevent Alzheimer’s, but it certainly has a noticeable positive effect and should be used more often together with other vital substances (for example Q10, omega-3 and phosphatidylserine) to prevent Alzheimer’s.

For most problems, 3-4 capsules (e.g. turmeric vida from kingnature) should be taken daily with meals throughout the day. For prevention 2 capsules are sufficient. There are many offers on the market. It is essential to ensure that it is a high quality product from organic farming and with a high curcumin content. 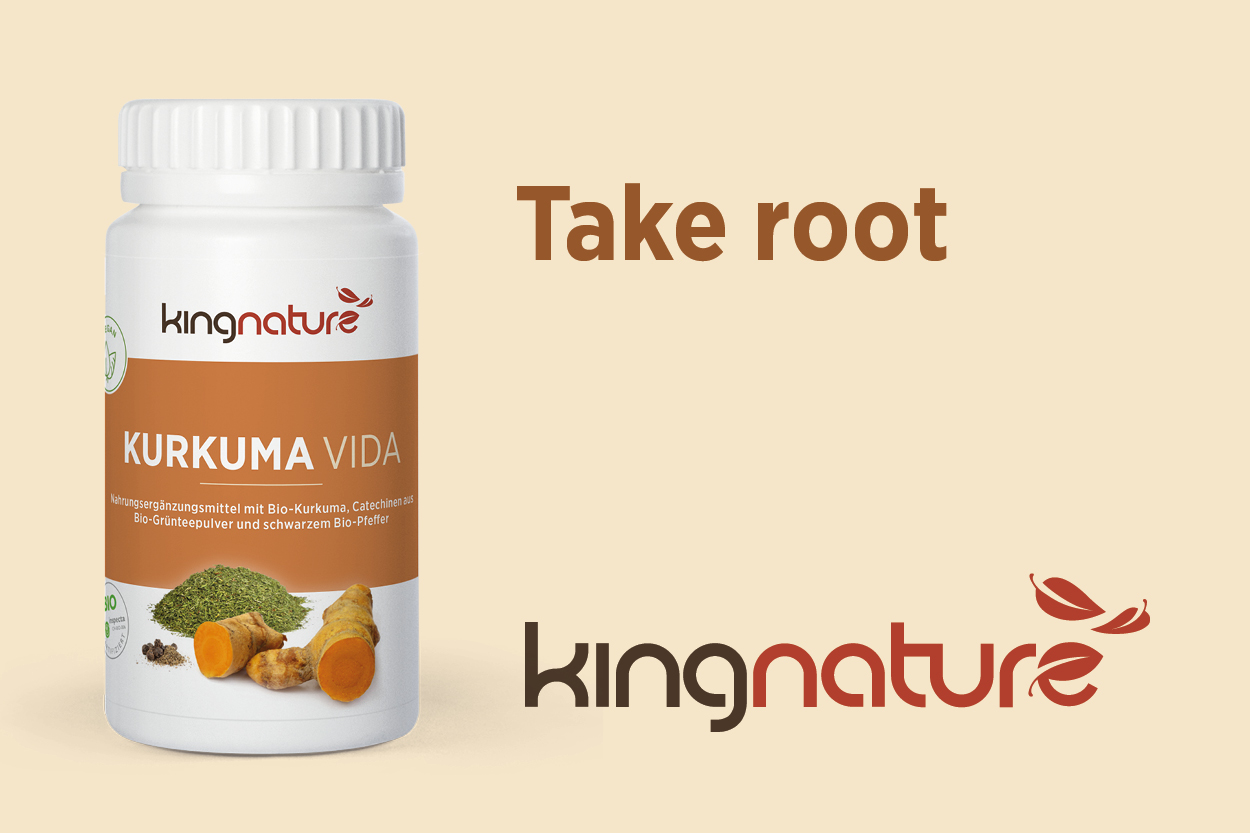