The trace element iron is a multi-talent, so it is no wonder that it has so many negative effects when there is a deficiency of it in the body. In most cases, however, those affected by iron deficiency are unable to correct the deficiency through diet alone, and common iron supplements are often not well tolerated. However, there are also natural iron preparations, e.g. from the very iron-rich curry leaf, which work and are also well tolerated.

The protein haemoglobin (Hb), the most important component of erythrocytes (red blood cells), contains the trace element iron. Iron in turn binds to oxygen, which is then transported with the erythrocytes from the lungs to our body’s cells. Iron therefore has a vital function; if there is sufficient iron in the blood, our organism is perfectly supplied with oxygen. Iron also contributes to the normal formation of erythrocytes and haemoglobin.

Vegetable iron in the video

Learn more about the vegetable ironand the vital substances it contains in the video with Dr. Heinz Lüscher.

Quite a few people are affected by an iron deficiency. Especially (young) women can sing a song about it, because due to the monthly blood loss, the risk of a deficiency is significantly higher for them, but also vegetarians and vegans can be affected. During pregnancy, the need for iron is higher, as well as in adolescents and athletes.

An iron deficiency is indicated by the following symptoms:

What are the causes of iron deficiency?

As already mentioned, menstruation can lead to a deficiency, especially if it is very severe. Beyond this, unnoticed blood loss e.g. in the gastrointestinal tract or very frequent blood donations can also be a cause. Often, however, a deficiency can also be traced to a poor diet. However, not only an inadequate diet can be responsible for this deficiency, but also the health of the intestinal system. If the intestinal flora is disturbed and the intestinal mucosa is inflamed, iron (and other vital substances) cannot be fully absorbed. In this case, the bowel would first have to be put in order by intestinal rehabilitation. A lack of gastric acid can also lead to a lack of vital substances and iron, because only with sufficient gastric acid can the food be correctly broken down and the vitamins and minerals be absorbed further on in the intestine. Finally, it should also be noted that many medications are literally iron robbers. The iron inhibitors among the medicines include Acetylsalicylic acid (e.g. aspirin), gastric acid blockers and cholesterol-lowering drugs.

In order to diagnose an iron deficiency, the serum ferritin (stored iron) should be measured in the blood. If this value is less than 30 µg/l in men and less than 15 µg/l in women, this is referred to as a storage iron deficiency. However, measuring the Hb value alone is not conclusive; it only decreases when the iron stores are depleted and for this reason not enough red blood cells can be formed. If the Hb value falls below the threshold value (women 12.0 g/dl, men 13.0 g/dl), iron deficiency anaemia (“anaemia”) requiring therapy is present.

Iron is ingested through food. However, the absorption capacity is limited. Only about 5 – 15% of the iron consumed is actually absorbed, the rest is excreted without being absorbed. If an iron deficiency is present or in order to prevent it, it is important to eat more foods that contain a high proportion of iron and to avoid or reduce foods that inhibit iron absorption. It is also advisable to consume foods that promote iron absorption. Iron is found mainly in meat (especially “red” meat) and offal, fish and seafood. The iron from meat can be more easily absorbed in the intestines than vegetable iron. A relatively high iron content among vegetable food sources can be found in legumes such as lentils, soybeans or chickpeas. Coffee, tea, milk and cocoa, cola and red wine inhibit the absorption of iron and should therefore be avoided if an iron deficiency exists. In addition, the absorption of iron is promoted by vitamin C – containing foods.

In most cases, however, those affected by iron deficiency do not succeed in remedying the deficiency by diet alone and the usual iron preparations are often not well digested and they can lead to digestive problems. There are, however, also natural iron preparations, e.g. from the very ferrous curry leaf. Iron preparations made from the curry leaf are highly concentrated and provide pure vegetable iron with very high bio-availability. Curry leaf iron is not only more readily absorbed than a conventional iron preparation, but is also much better tolerated. Curry leaf should not be confused with the curry we know (spice mixture). The curry tree (Bergera koenigii or Murraya koenigii) is a plant species that belongs to the rhombic family and thrives in tropical and subtropical Asia. The leaves are mainly used in South Indian and Sri Lankan cuisine and are very popular in those countries.

I recommend products with a formulation that ensures the highest possible bioavailability. E.g. in Lecithin microencapsulated iron (iron pyrophosphate) combined with a high amount of curry leaf extract. If a product also contains vitamin C, e.g. from acerola extract, the absorption of the iron is additionally promoted. 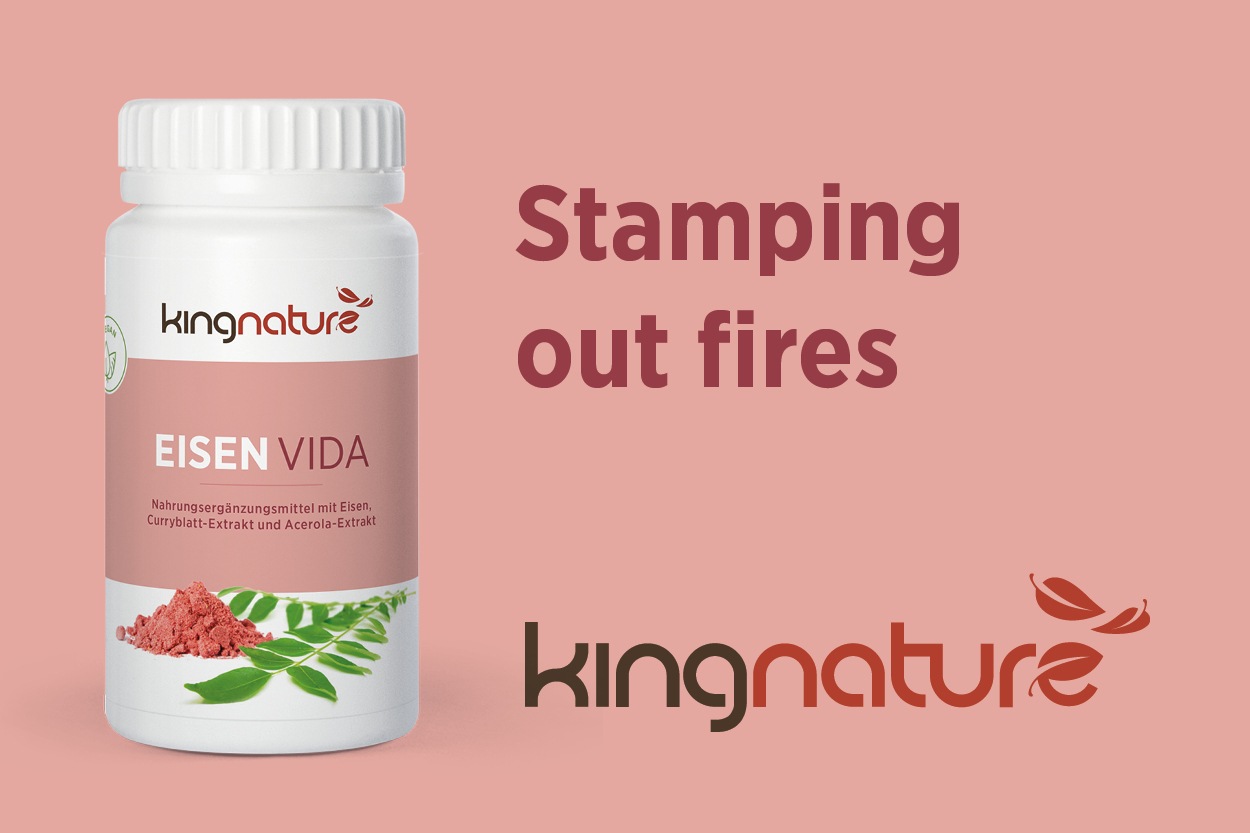