Our immune system is an impressive and highly complex miracle of creation. It can fight pathogens, but also recognizes and eliminates pathologically altered cells in the body. The immune system includes a whole series of specialized cells, e.g. macrophages. They can “eat” pathogens, foreign bodies and diseased cells and eliminate them (phagocytosis). Normally, only a few macrophages are activated in our body. The large remainder is only alerted in the event of a crisis. This happens through a special substance, the vitamin D-binding protein, which interacts with B and T cells from the specific immune system. In the process, a special messenger substance is released, which activates the macrophages and thus decisively supports our immune system. The macrophage-activating messenger can also be taken in the form of special food supplements.

Our immune system is a wonder of nature, a miracle in fact. It can distinguish between foreign objects and the body’s own. It can fight bacteria, viruses, fungi and parasites that would otherwise cause life-threatening infections. Without the immune system we would be constantly ill and unable to survive. However, the immune system also recognises pathologically altered endogenous cells and eliminates them. It can therefore be viewed as a part of the cleaning team which functions like the body’s garbage collection.

The immune system is as individual as a person’s fingerprint. There are even indications that its composition influences the scent of the body and thus plays a role in the search for a partner. Those who “cannot stand the smell” of somebody, do not fit together immunologically.

The human immune system consists of several organs, tissues, cells and messenger substances. Basically, two systems are distinguished: The non-specific immune defence which is the first line of defence. It is always ready for action and opposes everything that is recognized as “foreign to the body”. It is also known as the innate immune system we are born with.

The specific or acquired immune defence system must first learn what needs to be combated, and as it learns it is becomes more effective. It only develops after contact with a specific pathogen. Specialised cells of this second line of defence produce highly specific antibodies that match this pathogen like the key to the lock. These antibodies attach themselves to the pathogen and identify it. Now the scavenger cells recognize it as dangerous and eliminate it. The trick is that memory cells store the information on these antibodies. If it comes into contact with this pathogen again, the immune system can now produce the required antibodies very quickly, resulting in a rapid and targeted defence reaction. This is the reason, for example, why we only get some childhood diseases once in a lifetime. The first time we become really ill, because the immune system needs time to produce the necessary antibodies. With each further contact, this information is quickly available and the pathogen is effectively combated before we fall ill a second time.

Basically, our immune system is capable of recognizing almost every disease and coping with it by itself. However, there are pathogens that are so numerous and have such severe consequences that a person can die before his or her immune system gains the upper hand. This applies, for example, to plagues, like Ebola and other serious viral or bacterial infections. In other cases, the immune system does not recognize degenerated cells of the body or does not recognize them well enough. Then it comes to cancer. The reverse is just as malicious: the immune system is misdirected and begins to fight against healthy, endogenous structures. This leads to autoimmune diseases. In the case of allergies, on the other hand, the immune system reacts excessively to what are actually harmless substances from outside (pollen, food, insect bites, etc.). Pathogens that attack the immune system and thus weaken it are also nasty. These include, for example, the HIV pathogen that leads to AIDS.

The immune system includes a whole series of specialized cells. Two of these are the natural killer cells and the macrophages. Natural killer cells, or NK cells for short, belong to the innate immune system, but also play an important role in the specific immune defence. They are mainly directed against virus-infected cells or the onset of tumour formation. NK cells are the first to recognise affected and stressed cells. Once they have discovered a diseased cell, the NK cells release special proteins that perforate the cell membrane of the diseased cell and eventually lead to the cell’s death (apoptosis).

Macrophages are the largest cells in our immune system. They can “eat” and eliminate pathogens, foreign bodies and diseased cells (phagocytosis). They also present fragments of the pathogens to specialised B- and T-lymphocytes so that these cells, which also belong to the immune system, can develop the appropriate antibodies. Normally only a few macrophages are activated in our body. The rest will only be alerted in the event of a crisis. This is done by a special protein that binds vitamin D (vitamin D-binding protein) and interacts with B and T cells from the specific immune system. A special messenger substance is released, which activates the macrophages and increases their activity by a factor of 30.

Our body is wonderfully equipped to fight pathogens. Yet, viruses and cancer cells are not idle either. Sometimes these virus and cancer cells are able to use special enzymes to prevent the conversion of the vitamin D-binding protein into the special activation factor. This can significantly weaken our immune system.

This special messenger substance, which activates the macrophages and thus decisively supports our immune system, is contained in certain food combinations. It can also be taken in the form of a food supplement. The following effects then become apparent after taking the food supplement:

The activating messenger is usually administered together with a mixture of different strains of lactic acid bacteria (probiotics). Probiotics only partially survive the acidic stomach environment, but usually this is not a problem. Probiotics are best taken in large numbers, with enough fluids, and preferably on an empty stomach. This allows them to pass through the stomach quickly and more than enough of them still arrive alive in the intestines. However, for a highly specialized product containing selected strains of bacteria and the activating messenger, tests have shown that the effect and absorption are best when gastric juice-resistant capsules are used. Therefore, make sure to use an appropriate product. 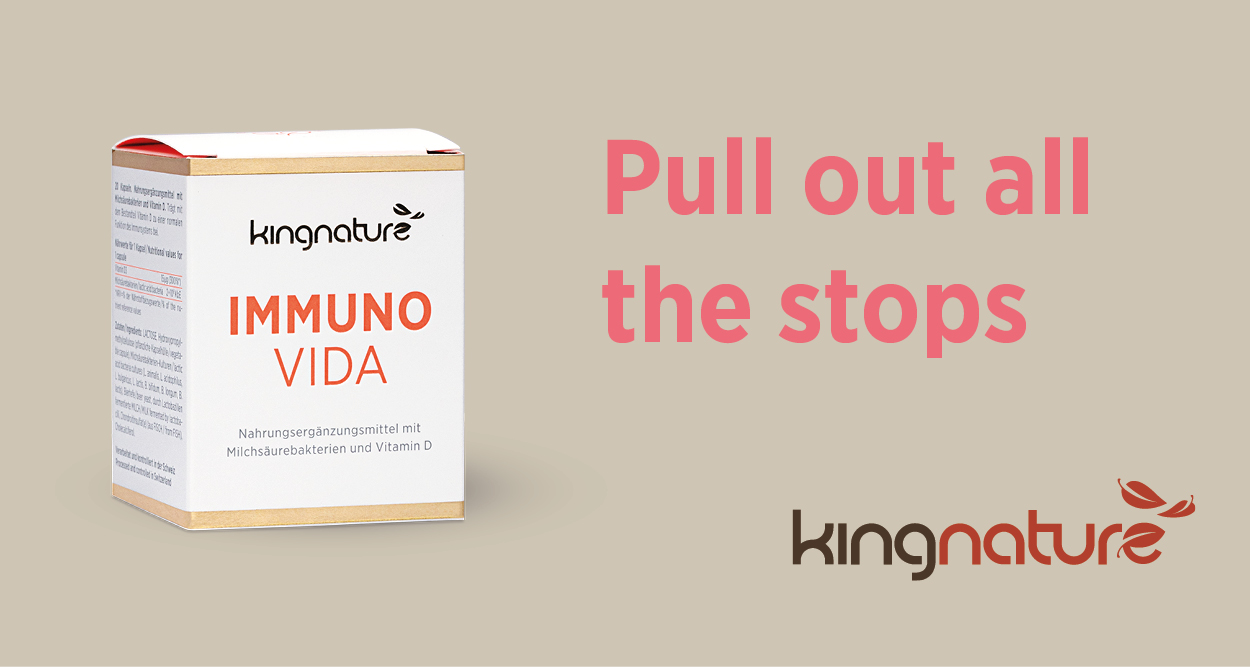 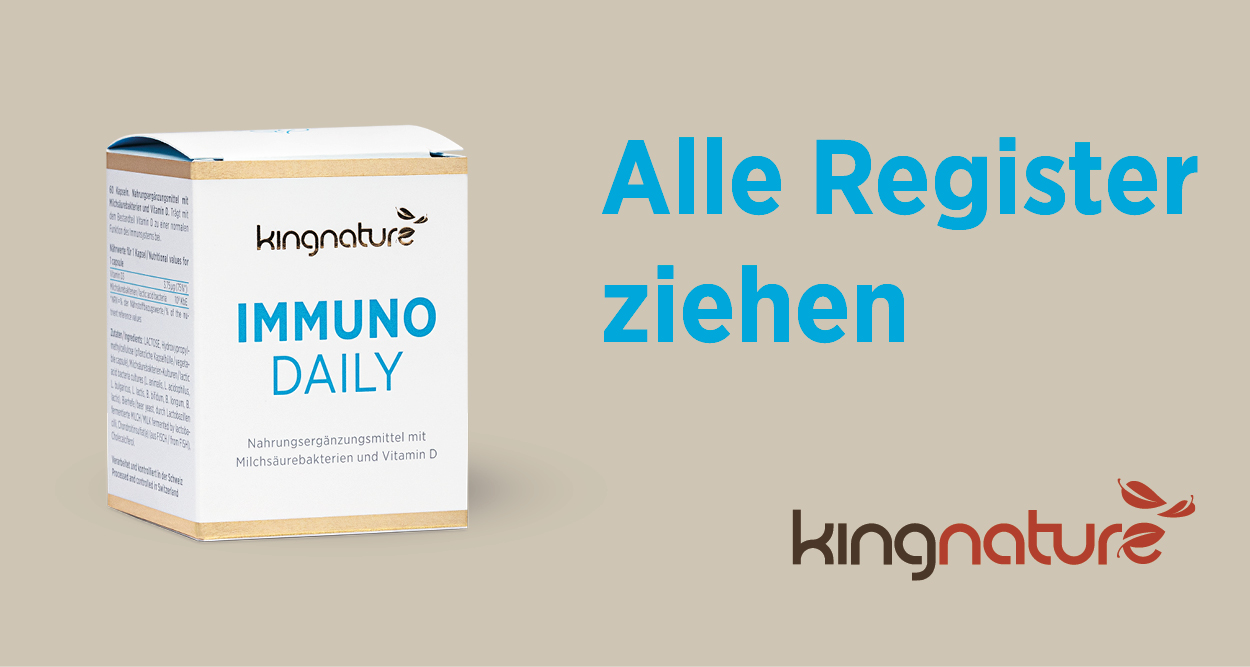